Eclipse e4 – from Client to Server and back again with MVC

I recently participated in a course where we learned about Eclipse e4 development. It was all very interesting, especially the reliance on declarative services from OSGi. I decided to have a think about how to build a skeletal application which makes server calls, to show how I would design the application architecture and break the application into bundles (plugins/components). I also focused on MVC.

The app is a simple realtime market place for selling animals. Users can view the details of animals which are for sale and then purchase any animal they like. They can also add their own animals to the market place for others to purchase. Here’s what it looks like (the red text isn’t part of the app!):

The first step was to think about a few requirements, use cases and design points:

So, to implement such a system, using Eclipse e4, I developed the following bundles. You can click the image to enlarge it. 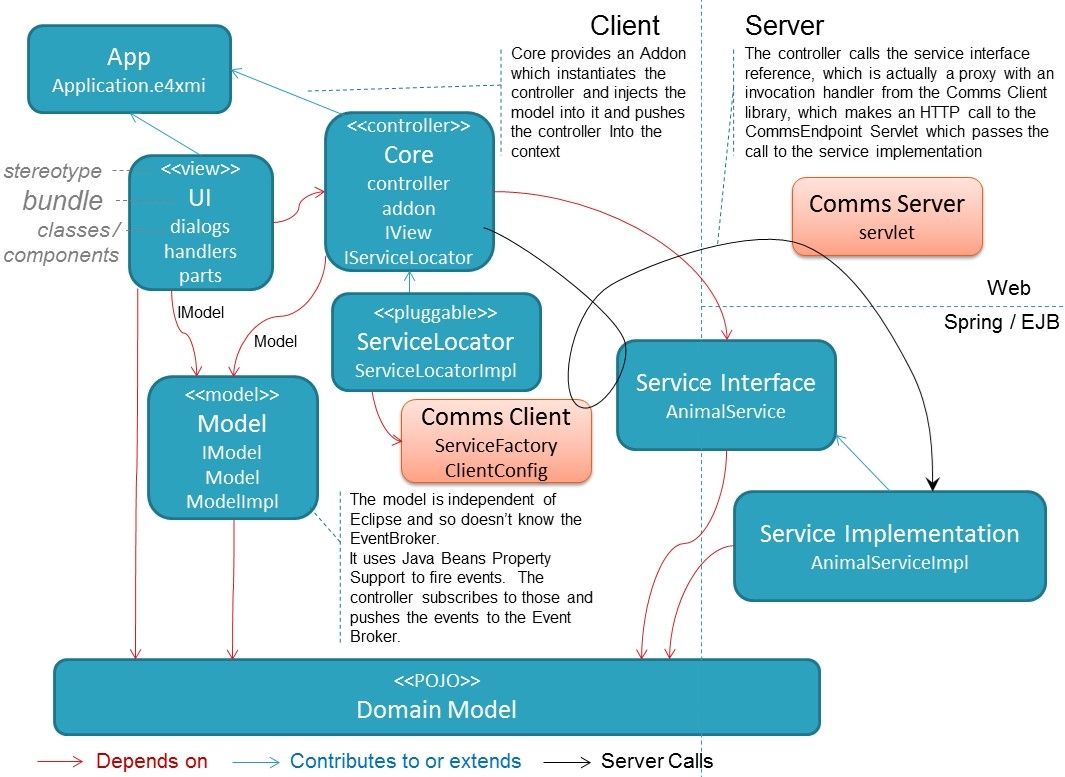 So, there are plenty of points to make about that diagram… Each block in the diagram is a bundle (plugin). The block sometimes shows a stereotype, then in larger letters the bundle name (abbreviated), and finally a list of components or classes which are the main reason the bundle exists.

I’m quite happy with the solution that I created. While it doesn’t make use of all the new e4 features, it does show how to use it’s dependency injection for an MVC implementation and how to use declarative services to create the non-UI objects. Central things like the event broker and selection service are used too.

One point where you could change the design slightly is that it is arguable whether the IModel and Model interfaces belongs in the model bundle, or whether they belong in the core bundle. It is the controller which requires them, so why couldn’t the core bundle define this interface, and using OSGi declarative services, let the deployer ensure it is available when the controller needs it? The model bundle contains the model implementation, and both these interfaces. The service locator interface on the other hand is not in the bundle which provides the service locator implementation. That’s because the core bundle author is stating that they simply need the IServiceLocator interface, and don’t care who provides it’s implementation, so long as it’s available at runtime.

The entire code for all the bundles can be downloaded here.

The comms library is available here.