The decline of dinos

Rather, this blog entry is about dinos which is a Facebook Application written by maxant. Basically, you get a virtual dinosaur which you need to feed. It can also fight or flirt with the dinosaurs of your friends, which directly affects its health. The idea is to keep your dino alive as long as possible.

There were several goals in developing it. First of all it was an experiment to see how the Facebook API worked. Second, it was to see how much faster a Facebook application would grow, compared to a normal website, because Facebook gives you  "free website advertising" in terms of being able to invite friends to play your game/application. As such it is a type of viral marketing. The aim is to give it enough momentum that its growth will become exponential. At a minimum, growth should be linear shouldn’t it? Well, right from the start, Google Analytics were used to track site traffic. Below are some graphs showing this traffic. 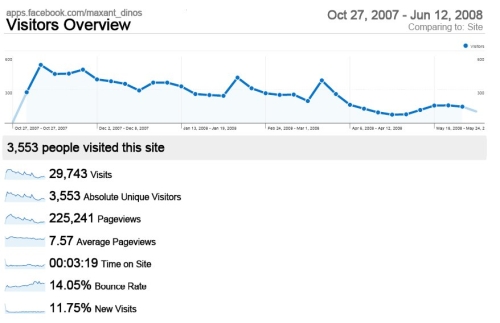 The general trend is slow but certain death, much like most original dinosaurs, all those years ago. The point of this blog is not to show that maxant is good at making crap games. Generally speaking Facebook application installations are falling fast, as the novelty wears off. The result is less new people playing the game and as long term players start to get bored, they just uninstall it. It’s the same principal as pandas dying out because they don’t mate and bear children frequently enough.

Now what’s interesting about all that? Well there is a site called adonomics.com which tries to give valuations to Facebook applications (they also broker deals for application sales and do VC). Back in its hey day, dinos was valued at thousands of dollars. If someone had bought it (if indeed it had been for sale!) they would have hoped to earn revenue through advertising, to at least get a return on their investment, but hopefully to rake in much more! Originally and for only a short time, dinos had Google Ads on its page. After a short time, a much more lucrative advertiser came along namely cubics.com. During its lifetime, dinos has managed to earn roughly 50 US cents per thousand page views. It uses ethical advertising, so nothing where the user is forced or tricked into clicking on ads or where they are required to complete an ads questionnaire in order to help them in their game. And perhaps as a result, dinos hardly manages to pay its rent (that is, server costs). If development time, server costs and advertising revenue are summed, it bluntly never made a profit. Lucky for the individual who might have bought it based on the adonomics.com valuation, that it was never for sale!

If you look at bigger applications, who also use ethical advertising campaigns, their valuations are also well out. This is not because adonomics.com is hyping the applications values, it is because their calculations are probably based on the valuation of Facebook (an albeit high one).

You don’t even have to go so far as looking at Facebook applications. Just take the market valuation of Facebook and divide the number of active users by it. It turns out (based roughly on figures I remember from last October) that an average Facebook user would need to generate hundreds if not thousands of dollars of revenue for people advertising on Facebook. Since I don’t ever buy anything based on Facebook ads, and none of my friends do either, there must be some people spending thousands or tens of thousands of their hard earned cash on products being advertised on Facebook. Or maybe it is just seriously over valued. Or more likely, people/companies who advertise on Facebook are really really getting ripped off. Who knows?