Here is a quick challenge:

Go to Google and search for "MVC".

Check each of the first ten search results.

What do you notice? Each description of MVC is different. Perhaps not in terms of the Model, the View and the Controller, but in terms of the details of how they interact with each other. In some descriptions the controller sits between the View and the Model. In others they all talk to each other. I have even seen implementations where an update in the GUI sends an event to the Controller which updates the Model which sends an event back to the Controller which updates the View, with the same data which it just changed, resulting in a very active user interface!

Now it starts to makes a lot more sense, that both Java Swing and Eclipse SWT / JFace do not implement true MCV but rather a light weight version referred to often as separable model architecture. Here, the Model is seperate from a "delegate" which is a combination of the Controller and View. It makes a lot of sense and reduces complexity and confusion a great deal.

One case where I would advocate a separate Controller is where the View is very complex and there are also a lot of business rules dictating how the data is validated before being set in the model. Then it is useful to implement a Controller. In such cases I suggest the following rules for your three MVC components: 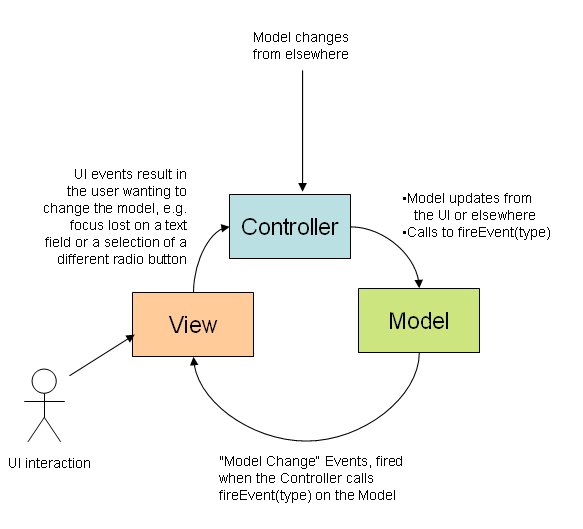 I believe that models who fire their own events are the result of frameworks like Java Swing and Eclipse SWT / JFace who have done away with the Controller. This works fine in such environments, but when the Controller is re-introduced it is significant NOT to send an event with each attribute change in the model – because it results in cases where a UI component is updated for example 20 times resulting in very poor UI performance. The UI can also unnecessarily hog System resources in cases like this because Java will not necessarily release them until the JVM is ready to do so.

This proposal is based on experience of different implementations as well as a project where we implemented exactly this pattern where it worked very well.